Ever had this type of an experience with a horse? 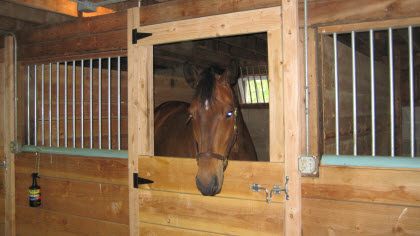 This is the story of Doc, a little Quarter Horse that happened  into my life one afternoon while I was teaching a new class of students.

I was going to be teaching three little girls that day and one of them was supposed to be riding ‘Doc’. It appeared; however that Doc was less than thrilled with the terms of his contract.

My students’ big sister was on Doc when I came into the arena, trying to ‘make him behave’ and having a hard time of it. Their Mom stepped up next to me, and quietly said:

“Our Western Trainer told us that every six months or so he really needs to be taken down a notch, we haven’t seen her and he is probably due for his semi-annual rough ride.”

I mulled this over, thinking hard about how to respond to that one. I watched as Doc stamped his feet and looked generally angry at his lot in life.

His rider was starting to look a little intimidated by his antics and I wanted to diffuse this situation without offending her or her Mom. “Listen, I know that Lex does not want to ride English, but I would be happy to set an appointment with you to come back and try and sort this out with her.

I will get on Doc, school him a little and then put your daughter on.  We can just see how that goes, okay?” I waited, knowing that I was not the trainer that the older girl wanted to work with.

Nothing personal, I just did not teach Western.   I half expected my offer to be rejected and they both surprised me. In unison they said: “Yes!”

This is how I came to know Doc; as an angry, naughty, ill mannered guy with a big chip on his shoulder.

I showed up at the barn the following Saturday with my own Dressage saddle because, if you’re going to get in the saddle, you better be ready for the ride.

I wanted to be as secure as possible in case Doc decided to take it up a notch just to impress me.

I assured both the parents (they both came) and their daughter that it was not my intention to be mean to this horse in any way.

My first plan of attack was going to be to talk him out of his current state of mind.

The Dad looked at me and reiterated what the Mother had already told me; that the previous trainers (now it was plural?)  had all gotten into real wars with this horse to straighten him out for his rider.

I should point out at this point that I have been riding and training horses for 37 years.  Oh yeah, I’m old.  I have had two shoulder surgeries and a knee surgery.

Most Doctors are amazed after seeing my x-rays that I do not walk with a limp.

One thing I have learned, the hard way, is that you do not pick fights unless you know you are going to win.

Sort of like lawyers never asking questions that they don’t already know the answer to?

Doc started around me with a wary eye.  He seemed to realize that I was “The Trainer.”   I could see his mind working; he was gearing up for the battle he was sure to come.

I did not want to make this a bad experience for him or me or his owners.

Did I mention that this horse is absolutely adorable?

Beautiful face, dark bay with white, he was cute as a button.  He was an Impressive bred and he looked like it. After lunging for less than ten minutes, I decided to just get on and see what was what.

As I led him over to the mounting block, I noticed that my students’ Mother quietly stepped out of the ring and walked around the corner.

The Dad backed up to the door; he could see her and I from that vantage point. I patted Doc on the neck and stepped quietly away from the mounting block.

The tension in this horse was palpable, so I just kept walking.

Every few steps the horse would tense, I would pat him, and we would walk a few more steps.  After ten to fifteen minutes of this,

During our lunging I had made a mental note that Doc was a typical Western Pleasure boy; cluck for trot, kiss to canter.  So instead of using my leg I used my voice only at first to ask for increased gaits.

Whenever the horse ‘set up’ and tried to jump up and down, I would send him forward with my voice and throw my reins up his neck so as to be sure not to pop him in the mouth,

This was clearly something that had happened repeatedly and part of his cause for umbrage.  I slowly incorporated my leg into the asking until he stopped seizing up at the touch.

Out of the corner of my eye, I saw Dad gesture to Mom, and she stepped back into view. They were discussing something, I was busy with Doc.

I figured if they were planning to fire me for not following the plan they could do it later.

After twenty or so minutes I turned to Lexis:  “Okay now, would you like to get on your horse and we’ll see if I fixed anything?”  I asked her. “Yes”, she responded right away and enthusiastically.

I took that as a good sign. Lexi got on and had a much better time of it, to my satisfaction. She had some mistakes in her riding, but we could work on these and I thought she was a good student.

She tried very hard to do the things I asked, but it’s hard to ride a horse that is ‘over trained’  that is, Doc has no filter;  he listens to EVERY move his rider makes.

My job here was done for now.

I said to the parents; “I would like to ride this horse a few more times to make sure that we are on the right path.  Then, I would like to recommend a Western Trainer for your daughter to continue on with.  Is that okay with you?” We all agreed on a plan.

The girls took the horse back to the barn area and I stayed out in the driveway with their mother.  I told her that I did not see the value of beating the crap out of a child’s horse.

I wanted him to be a little less sensitive and not feel afraid to filter out some of her aids.  It was also unfair to ask this horse to be a show horse for the older girl and also expect him to be a walk trot horse for her younger sister.

He wasn’t cut out for it and he wasn’t a lesson horse.

He took every jab and mistake right to heart.  And historically, when he reached the breaking point he was beaten for his recalcitrance.

Not fair, it just was not fair.

Mom thanked me, and asked me to please continue with my plan.

She then told me that the reason that she walked out of the ring was that the last ride she witnessed with a trainer made her sick to her stomach. When I asked her why she put up with it she said: “I didn’t know, we didn’t know.

Our previous trainers told us this was the only way to fix the problem and we believed them.

They were, after all the professionals that we were paying, so we had to believe that they knew best.”

I did not ask for any names, which would have been un-professional of me. But it saddens me when I think of the abuse that occurs every day under the guise of training.

The horse can only be as good as the rider on top of it.

You want a better horse?

Be a better rider.   I am returning to that barn to ride Doc today. Sometimes the second ride is more telling than the first. I’ll let you know how it goes. In Training by Patti Jo Tymann